Treatment Area:
475 Under Each Tanks Footprint

Trans Mountain Pipeline L.P. was expanding its existing pipeline system from Edmonton, Alberta, to Vancouver, BC, to increase the carrying capacity of light & heavy crude oils and refined products. WorleyCord LP (CORD) had been contracted to provide engineering, procurement, and construction (EPC) services for some of the facilities between Edmonton, Alberta, and Hope, BC. The engineer recommended soil mixing to improve the soft clay underneath, but Menard proposed to design and construct Controlled Modulus Columns (CMC) under the future tank (Tank 3 and Tank 4 of the Edmonton Terminal) foundation to increase the bearing capacity of the soil and limit the overall settlement of the tanks. CMCs have proven to be economical, less time-consuming, and limited vibration with nominal/no spoil generated during project execution.

The general subsurface stratigraphy consisted of:
• Loose Clay fill in the top 4m;
• Firm Clay till for the next 8m;
• Compacted Sandy material;

• Clay Shale making up the bedrock beneath

The Engineer initially recommended in-situ soil mixing to treat the soil below the future tank pad, but Menard offered to design and construct Controlled Modulus Columns (CMCs), which are designed to reduce the global deformation of a soil mass by the inclusion of a semi-rigid reinforcement element. The design aims at developing an optimal combination of load distribution between CMC and soil mass around it to increase the modulus of deformity and limit the post-construction settlement of the soil. Menard’s dedicated design team optimized the diameter, length of the CMCs, and type of concrete to distribute the load evenly and avoid any weak points. The global deformation was confirmed by performing two Static Plate Load Tests on isolated CMCs outside the tank footprint.
A total of 450+ CMCs were built under each tank to support the weight of the tank and the oil/gas stored in it. CMCs have proven to be more robust, inexpensive compared to other ground improvement techniques and excavation, and quick to build, and the overall outcome of this technique is tidy. The results of the 19 cone penetration tests (CPT), as well as the bearing capacity-settlement calculations and the analysis of the liquefaction potential, made it possible to validate the performance of the treatment. 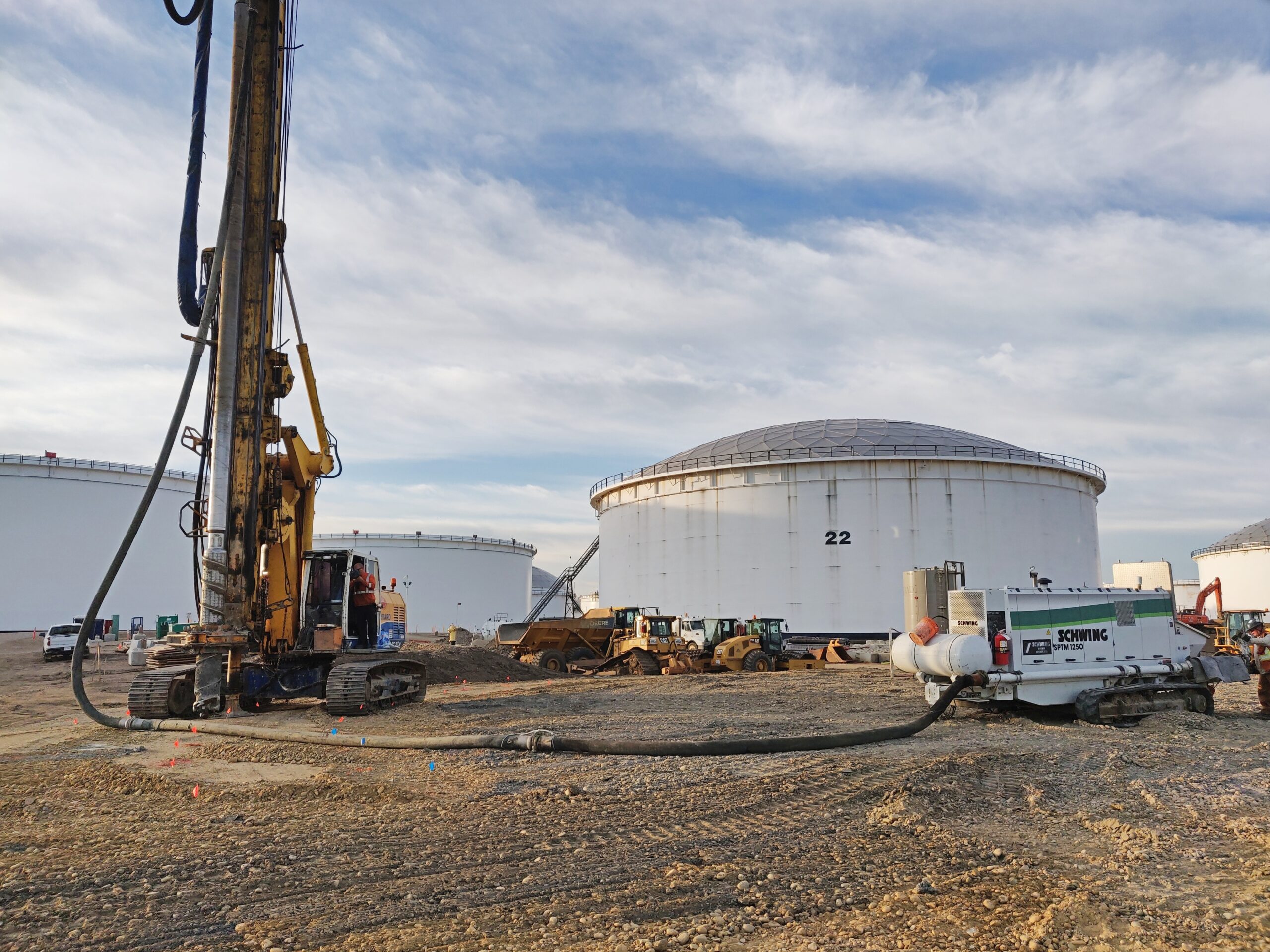 CMC’s being installed for storage tanks